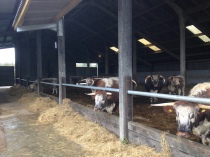 The 'blog' has been abandandoned a bit!.  Over 2015 and 2016 we have concentrated on increasing the herd numbers and feel very satisfied with the offspring produced.  We have added more cattle housing at the farm to enable us to house the majority of stock over the winter, thus giving the fields a much needed rest and respite for the cattle from the colder wet months.  We have started to introduce Poll Dorset ewes onto the farm to enable us to lamb in the Autumn  allowing us to catch the buoyant spring lamb market trade.  in November 2015, the farm once again won the Mid West Longhorn Breeders 'Large' Herd competition.  This is a competition that is held annually with a stock judge visiting the farm, seeing all the animals in situ, and judging the animals against the other herds within our area which runs from mainly Herefordshird down through Devon, Cornwal, Somerset and Dorset.

2016 - Feeling very pleased.  We have been awarded a certificate of conformity for the Red Tractor Farm Assurance Beef and Lamb standards Scheme.   This is a scheme assuring food safety, animal welfare, hygiene and environmental protection through every part of the food chain.

2017 - A succesful calving year with calves making a good price in the winter suckled calf sales.  We have introduced another couple of new bulls to the farm, a South Devon 'Tudor' and a very handsome Charolais called 'Roger'.   Hopefully some strapping calves will be produced for the future markets.  The new farmhouse is nearly completed and Feniton Emily won the Senior Cow class again at the Mid West Longhorn Herds Competition.  This accolade we have won for the past three years.

2018 - This year, Feniton Christine took the Senior Cow prize at the Mid West Longhorn Breeders awards.  It has been a busy year converting old cattle sheds into a new Barn Conversion used for holiday letting - accessed via  Cottages.com.  Court Barn, a three bedroomed single storey conversion has started successfully with plenty of bookings and visitors being deligted with the living space.  Suckled calves sold well in the Autumn sales, selling at Kivells Exeter Livestock market.  Two new bulls were introduced to the farm, a Pedigree Charolais named Roger and a South Devon named Tudor.  Unfortuantely, this year saw the loss of my old mare Maisie, a wonderful horse who bred me a lovely foal in 2013.

2019 - Some fabulous calves born from February to June, some great South Devon X Longhorns who are well put together with wonderfully quiet temperaments.  Definitely we will keep some of the heifers for future breeding stock.