The shed with the race and sheep race in front was put up last winter and the one with the machinery in has just been erected.    A few finishing touches and we will be able to house livestock in it shortly.  The shed showing the sheeted doors has historically housed hay and straw but that too now has the heifers in it.  Every available housing is utilised! 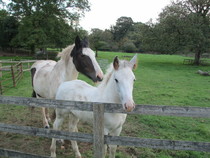 More pictures of Maisie and Flynn - the weather has remained dry and mild which has enabled cattle to be kept out longer.

Flynn had a short sharp shock at the end of the month with a visit from Jamie, our vet from Stringer Equine who came to castrate him!!!.   It was a textbook operation, recovery was brilliant and he still has the comfort of Maisie to help him get over it. 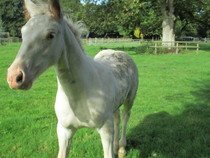 Flynn as you can see is growing into a fine young man - and nearly all white now!

This month our wonderful foot trimmer  Charlie Davey has visited to examine a cow showing lameness.  Some photos to follow show how the cow is securely restrained in a 'roll over crush' - safe for the cow and the handler.  This way, Charlie can thoroughly examine, trim and treat the problem.  In this instance, the cow has a necrotic toe.  Basically,  an infection has entered the toe, causing lameness.  The remedy is to cut out the infection to allow the wound to drain and place a block on the good toe (cows have two).  The block will lift the foot on one side alleviating the pressure on the bad toe.  Its a quick simple and effective remedy.  The cow is back out with her mates and is much happier!.

September warm and wet weather has bought with it a nice flush of grass which has pleased the cattle and sheep.  The sheep are currently out being 'flushed' with grass ready for the rams to visit mid October.  Our super Limousin x Longhorn calves are flourishing and will be ready for the Kivells suckled calf sales in October and November.   'Flynn' my colt is growing rapidly and although born skewbald, has pretty much  lost his brown patches so is now nearly all white apart from a brown tail!

Jonathan's horse Strawberry Mojo II winning the Smarter Training Group National 1.15m Members Cup Consolation Class and 9th in the Autostop Adventurer Championship at the SCOPE festival of Showjumping at Staffordshire County Showground on Saturday 31st August.  'Mojo' is ridden by Jonathan's niece Emily Morris who is based near Shrewbury in Shropshire.

Mum entered the Feniton Flower Show and was so pleased to have won 2 x 1st prizes for her Apple cake and Swiss roll.  She then went on to win the Mary Richards Memorial Cup for best baking exhibit with her Swiss Roll!. 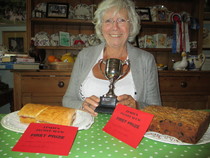 We are now into August.  We have just completed our annual whole herd TB test which is always quite a worrying time.  However, we did pass so a sigh of relief until next year.

The flies are definitely out in force this month, the rain has come and everything is looking a little greener than it did in July.

'Flynn' is growing well and turning into a little character - he certainly is a cheeky monkey!.

MAISIE HAS FOALED! - Finally Maisie foaled on Thursday 27th June whilst we were having coffee!!.  The foal, a coloured colt called 'Flynn' is doing really well and is a huge character.  Maisie is a fantastic mum and looking after him beautifully.

Shearing has been completed and the first lambs have gone off to market.  Lambs will now be picked weekly depending on weight with some being kept for sale from the 'farm gate'.  Maisie is starting to udder up which is very exciting - with her due date of the 22nd June, I don't think she will be too far off!

We  had a succesful Royal Bath and West show with Heronbrook Legend winning the Senior Longhorn Bull class and going on to win the overall Longhorn Male Champion.  He was impeccably behaved and was chosen to represent the breed in the Burke Trophy on the Thursday of the show alongside a Senior Longhorn heifer owned by another exhibitor.  Unfortunately, they didn't win! although an honour to be picked to compete. 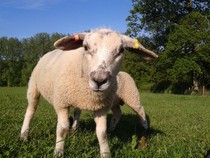 All the cattle are out in the fields now and finally towards the end of May the grass is starting to grow.  The calving has almost finished, just another 5 Longhorns to calve to a Limousin bull.

The sheep are doing well with shearing due the first week of June.  Very important as they are starting to feel the heat and the flies are about so there is always a risk of fly strike.

The Royal Bath and West show is the first show on our calendar, presenting our Longhorn Bull Heronbrook Legend to his first event with us.  The show is over 4 days with the Longhorn Judging on the first day, the Wednesday.  We also have a couple of yearling heifers entered - it is a good opportunity to get them halter trained and used to being led around.

Lambing has reached a succesful conclusion with a survival rate of just over 1.9 lambs per ewe.  All are turned out now, eating copious quantities of lamb creep, growing strongly and hopefully soon ready for market.

Calves have been coming thick and fast.  Some super Pedigree Longhorns and a fabulous crop  of Limousin x Longhorn calves - all doing well and growing fast.

We have recently bought two Pedigree bulls - one being a British Blonde and the other a Limousin.  Both have settled well and will be introduced to cows soon.  Heronbrook Legend, our Pedigree Longhorn bull will also be turned out with cows shortly. 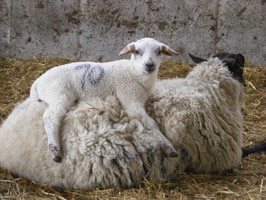 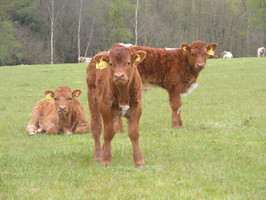 Lambing is well under way now.  Lots of multiple births and lots of sleepless nights. 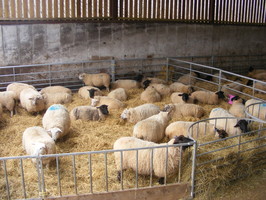 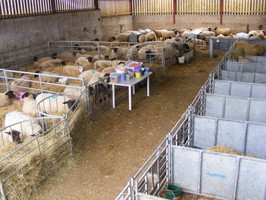 Set up ready to go - pens on right empty - Now they are full!!

Orphan lambs on the bottle - this method of feeding is a little less time consuming.  These are lambs that have been born as triplets or quads and in order to save the ewe feeding more than 2, are put onto the bottle.  If we can, we will adopt these onto another ewe with only 1 lamb. 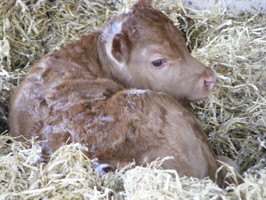 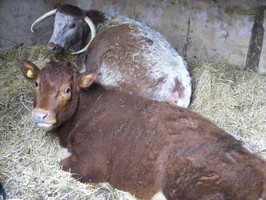 This is an older Limousin x Longhorn calf born Dec 12 - nearly as big as his mother!